I was away for over 18 days and not once in these 18 days did I regret being away. I missed every single blog post and while I am not happy about it I am excited to have gathered a number of experiences which are worth sharing.

I was hiding in a place called village chakri in the district of Chakri-Dadri in the state of Haryana which is known for its fierce and feisty women; its history of giving maximum soldiers; its agriculture; its diary products; and its will to improve.

Before my visit to chakri, I was reeling under certain gross misconceptions about women living in rural areas of this country and the same are as follows:

Well … All of it is untrue.

Haryana is also known as the “Jat Land” because of its demography. Criticized for its low sex ratio owing to their preference for a male child, this state has been in the news for all wrong reasons. What most news channels fail to report is its growth … It tops in the agricultural output and is on its way to becoming a manufacturing hub. With its recent upsurge in economic indicators, Haryana has witnessed serious law and order issues, majority of which are connected with gender violence and female infanticide. However, things are rapidly changing.

I had the privilege of meeting some of the most progressive women I have seen till date … They are progressive not as a consequence of their economic alleviation but as a by product of technological advancement … Cable TV, penetration of internet, cheap smart phones and constant exposure (and absorption of) to information has transformed the mindset of these women. They work in the fields and then work at home but never does their exhaustion stop them from sending their kids to a computer class … Given that their husbands are away for most of the year, they are adept at negotiating with the shopkeeper and can get you best deals because of their bargaining skills.

Majority of these women study at night for they want to be known as “graduates” and after a hard day’s work when they sit down with their books, it is enthralling to see their aggression. They insist on girls’ education and deter marriage till the age of 18 … They want sons not because of their hatred for daughters but because the sons grow up to look after their old age parents … They speak against reservations and believe in equal opportunity … I had actually heard one of them say … “Aarakshan ki zaroorat koni … Mukabla toh barabar wala mein hota hai” (We dont need reservations … We need equal opportunity and fair competition). These women are extremely clear about what they want … They want their daughters to study and get respectable jobs and their sons marry someone who will not be a misfit. What was depressing though was their stand on “honor killing” … Almost all of them support honor killing and that is something which needs to be changed. They are standing on the threshold of a mental and a cultural revolution and their views especially on issues like honor killing act as an impediment for such a revolution to occur.

Strong, sturdy and sexy … these women surely know a thing or two about pleasing their husbands and have definite sexual needs of their own which they are not ashamed of discussing with their male counterparts. It was surprising to be a witness to such equality and liberation when it came to sex.

Hariyanvi women take pride their food … I was fed the purest and the most authentic hariyanvi cuisine comprising of bajra ki roti with dollops of ghee, jaggery, curd, buttermilk, pickle, onion, lentils and leafy vegetables … I was made to consume it twice a day for I had to work in the fields all day. Yes … The woman who never stepped out in the heat worked in the blazing sun and never has she felt ever so energetic and agile. I toiled hard in the fields and after reaching home (yes … those 15 days were so full of love that I want to call it “home”) I could barely keep my eyes open whereas these women cooked, cleaned, washed clothes, utensils and taught their kids and all I could do was marvel at their strength.

They chat non-stop in their “jat” accent … their conversations revolve around the professional success of other women, the disease their cattle is suffering from, ways and means to increase the agricultural output and their childrens’ education. They gossip but their gossip has dignity and distinction attached to it … They know exactly what section 498A of the Indian Penal Code is all about and how women misuse it. They know how to deal with rapes and sexual violence and the consequences thereof. You cannot accuse them of ignorance … But inaction? Yes. Sometimes. What scares them is societal ostracization and social boycott. What they secretly nurture is their ambition of being a “graduate” and shaping the future of their children. Calling them a product of their circumstances is to insult their intelligence for they are a product of their own choice and consciousness. Tell them about the likes of Geeta Phogat; Sakshi Malik and their chests swell with pride … For them they are”Haryana ki beti, Gaon ki chori” who made them proud but they arent moved by their success because their definition of success has not changed over the years. Their mental and economic emancipation has not yet reached their fundamental notions but these women do not require lessons in patriarchy and feminism … They are not victims of patriarchy. On the contrary, they are agents of patriarchy who wear feminism on their sleeve. They advocate patriarchy but are feminists in their heads! A wonderful yet disturbing contradiction … They are not wired to nurture the desire of overthrowing patriarchy but at the same time are conditioned to stand up for themselves should they be ill-treated by their husbands. This state contributes most to the number of cases filed by women against their husbands on the grounds of domestic violence, dowry, sexual abuse etc. … A positive way to view such a scenario is to appreciate their knowledge of the law. They are aware of their rights and fight till the very end … “Main koni harati. 498 mein case karyo hai” (I will not lose for I have leveled charges on the grounds of dowry) was a vociferous statement by a woman who had filed a case for divorce and alimony against her husband. Instances such as these are inspiring for women are now standing up for themselves …

These 18 days I have missed connecting with you all because I was in a different world … I wanted to be away and experience the countryside to its fullest.

Missed you all like crazy … And will miss you starting tomorrow … 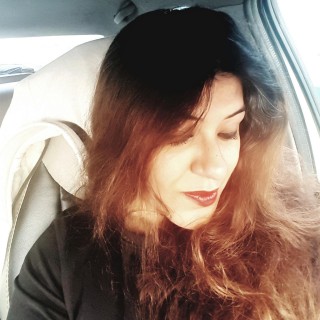 Genius in Mind; Gypsy at Heart ...